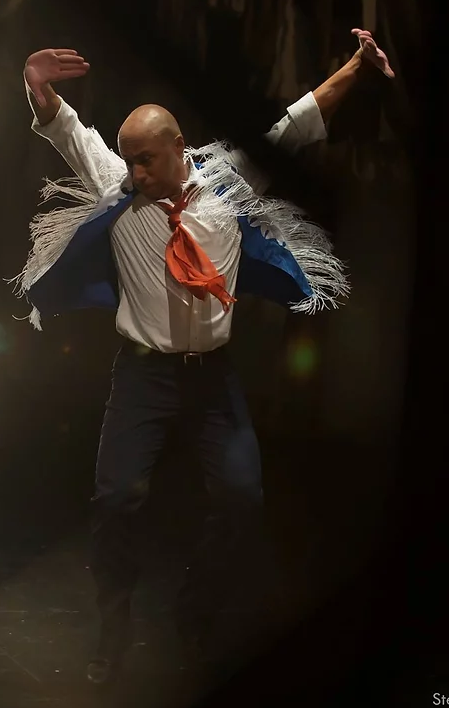 Edwin Aparicio is considered to be one of the most sought-after flamenco performers, teachers and choreographers in the United States. He has been described by critics as “the most amazing dancer seen in years,” “a technical powerhouse dancing with blistering conviction,” having “hellfire footwork” and choreographies with “beautiful, evocative imagery." He is a recipient of the Cross of the Order of Civil Merit, granted by the King Felipe VI of Spain.

Trained by the world renowned flamenco artists Tomás de Madrid and “La Tati”, Mr. Aparicio made his debut at the legendary Casa Patas in Madrid in 2001 and in 2005 performed as a soloist and a company member with “Jóvenes Flamenco” at the Centro Cultural de San Blas in Madrid. Mr. Aparicio performed with The Washington National Opera at The Kennedy Center in El Gato Montés (1997) and in Don Giovanni (2003), under the direction of Plácido Domingo, and in Carmen (2015).

Mr. Aparicio has performed as a soloist throughout the United States with ensembles such as the “José Greco Spanish Dance Company” and Reynaldo Rincón’s “Romería Flamenca”. He has shared the stage with such internationally celebrated artists as Chuscales, Silverio Heredia, Roberto Castellón, Pedro Cortés, “La Truco”, Elena Andújar, Carmela Greco, Pastora Galván and José Luis Rodríguez.

Based in Washington DC, Mr. Aparicio has created a loyal following as an instructor, performer, director and choreographer in the nation’s capital. He also frequently performs and imparts master classes in other US cities, such as Chicago, where he was invited to participate in several special programs organized by the Flamenco Arts Center and the Cervantes Institute.

In 2005 Mr. Aparicio was the choreographer for the GALA Hispanic Theatre’s highly praised production of Lorca’s Yerma, directed by the acclaimed Hugo Medrano. Since then GALA Theatre has become Mr. Aparicio’s base for presenting his eclectic company and for premiering his newest works. He is also the resident coordinator and a featured performer of the Theatre’s annual Fuego Flamenco Festival.

Since 2008 Mr. Aparico is a member of the faculty at the Washington School of Ballet. In May 2013 he performed as a guest artist in The Washington Ballet's production of Hemingway: The Sun Also Rises at the Kennedy Center in Washington DC.

2015 marked Mr. Aparicio's international debut as a director, when he presented his work Íntimo at the Teatro Nacional Rubén Darío in Managua, Nicaragua.